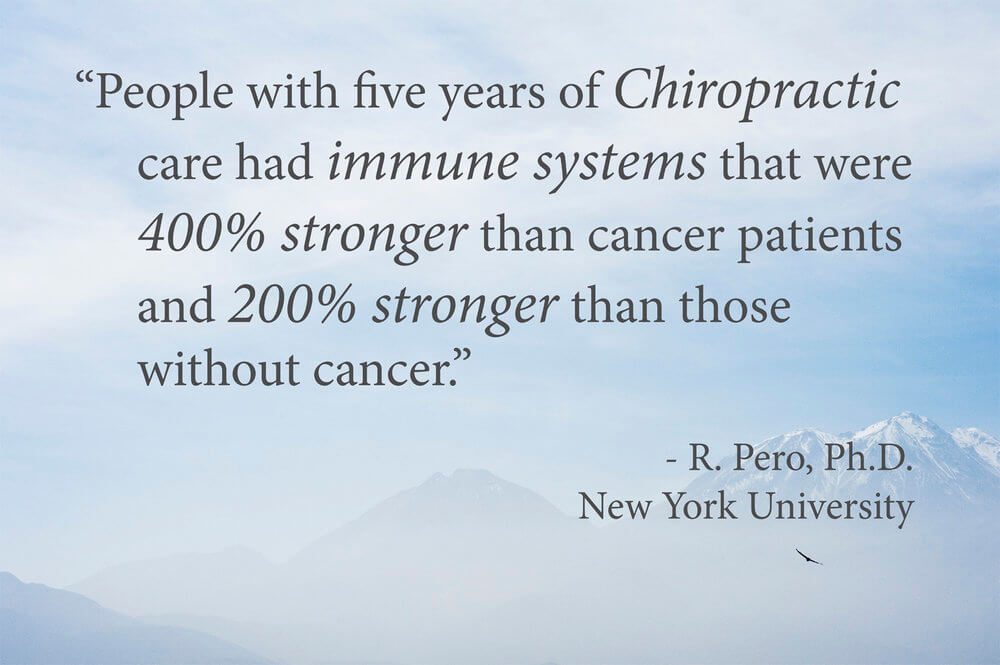 Pero concluded that “chiropractic may optimize whatever genetic abilities you have” so that you can fully resist serious disease. “I’m very excited to see that without chemical intervention…this particular group of patients under chiropractic care, did show a very improved response, “ he told CBSRF. “These changes occur from chiropractic treatment.”

In 1975, Ronald Pero, PhD., chief of cancer prevention research at New York’s Preventive Medicine Institute and professor of medicine in environmental health at New York University, began developing scientifically valid ways to estimate individual susceptibility to carious chronic disease. Pero and his colleagues found strong evidence that susceptibility to cancer could be gauged by the activities of various enzymes involved in metabolic and genetic change due to exposure to carcinogenic or “mutagenic” chemicals. An individual’s immune system responsiveness, or immune competence, “also was directly linked to certain DNA-repairing enzymes, which provided an objective way to assess disease susceptibility.” Lack of those enzymes Pero said, “definitely limits not only your lifespan, but also your ability to resist serious disease consequence.”

Pero was also fascinated by various hormones’ synergistic relationships with other cancer-inducing agents to promote disease. For example, thyroid hormones affect the early phases inducing of radiation and chemically induced cancer. If the thyroid produced too much of either thyroxine or thyroid-stimulating hormone, cancer risk greatly increases. Since the nervous system regulates hormonal balances, it too can influence susceptibility to cancer. Along these lines, various kinds of spinal cord injuries are accompanied by a high risk of developing cancer, particularly lymphomas and lymphatic leukemia’s. This connection led Pero to consider chiropractic as a potential alternative for reducing the risk of immune breakdown and disease.

In 1986 Pero collaborated with Joseph Flesia, D.C., chairman of the board of directors, for the Chiropractic Basic Science Foundation, Inc. With a hefty grant from CBSRF, they began a research project at the University of Lund in Lund, Sweden. Using Pero’s test to gauge resistance to hazardous environmental chemicals, they hypothesized that people with cancer would have a suppressed immune response to such a toxic burden, while healthy people and people receiving chiropractic care should have a relatively enhanced response.

Measuring 107 individuals who had received long-term chiropractic care, more than 2 years, Pero’s team turned up some surprising findings. All of the chiropractic patients were “genetically normal” – that is, they had no obvious genetic reasons for increased resistance or susceptibility to disease. Any difference, therefore, had to be accounted for by environmental or therapeutic factors. The chiropractic patients also had 200 percent greater immune competence that people who had not received chiropractic, and 400 percent greater immune competence that the people with cancer or other serious diseases. Surprisingly, despite a wide range of ages in this study, the immune-competence did not show a decline with age-it was uniform for the entire group.

Pero concluded that “chiropractic may optimize whatever genetic abilities you have” so that you can fully resist serious disease. “I’m very excited to see that without chemical intervention…this particular group of patients under chiropractic care, did show a very improved response, “ he told CBSRF. “These changes occur from chiropractic treatment.”

Just to be clear, at Platinum Chiropractic we do not treat any diseases such as cancer. We focus on Neuro-Structural correction of the spine and nervous system, which greatly enhances your chance and ability to regain and maintain good health. Don’t miss December’s workshop: 7 Ways to Bulletproof your Immune System